Ronda is really a monumental city. The Old Town has been designated as a Historical-Artistic Complex: a collection of buildings in the most variegated styles and a succession of charming nooks and crannies. As soon as you set foot on Alameda del Tajo, you will be wrapped in the grandiose atmosphere of Rainer Maria Rilke’s ‘dream city’ and the singular beauty of its natural environment.

Ronda is a city divided by a gorge: El Tajo. The New Bridge was built across it in the eighteenth century. Being 98m long, it is supported by round arches. The best views of this imposing feat of architecture are offered from the balconies of the Cuenca Gardens. The Old Bridge is older and less spectacular, dating from 1616. In its environs you will see the Archway of Philip V and the Chair of the Moor King.

The Mondragón Palace is Ronda’s most remarkable civil building. Built in the fourteenth century, today it houses the Ronda Museum. For a token of Modernist architecture, go to the House of San Juan Bosco. The Palace of the Marquis of Salvatierra is a fine mansion too. The Giant’s House is a Nasrid gem, while the Palace of the Moor King, from the eighteenth century, features stars carved out of the rock, leading from the gardens to the Arab mine by the river. 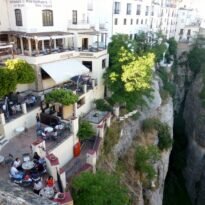 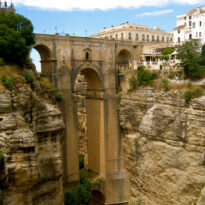